Pre-pixelated clothes for Reality TV shows. Check out the post that started it all.

I'm a professional photographer, but sometimes I get ideas for projects, designs, gadgets, and other topics. I write about it all on this blog. You can find the meaning behind the name “Ironic Sans” back in the very first post.

David Friedman Photography
When I'm not writing the blog, I make a living as a photographer. This is my photography website.

You are reading all the entries posted to Ironic Sans in the “Star Wars” category. If you are looking for something specific, you may try searching in the Ironic Sans archive.

It’s been five years since Twitter introduced Lists and frankly I never found a use for them. It’s not that I don’t see the value in curated lists, but I never remembered to look at them, preferring to watch my complete stream of tweeters, signal, noise, and all.

But I finally came up with a use for them. So without further ado, here are a bunch of Pop Culture Twitter Lists you can follow, in apparently random order, with notes about what you’ll find there.

(You can also see them with nicer formatting but without the notes, and easily to subscribe to them, here on Twitter).

Am I missing your favorite cast that’s on Twitter? Let me know at @ironicsans and maybe I’ll add it when I get a chance.

(Wow, a bulleted list of links sure highlights how dated my site’s design feels)

You may remember that about four-and-a-half years ago, I made this image:

By popular demand, I sought to make it available on posters and t-shirts. But I wanted to do so through proper channels, and ended up partnering with Zazzle, which had an existing licensing agreement with Lucasfilm. (They no longer do, so don’t bother looking.)

But in order to get formal permission, I had to jump through some hoops. One question that came up — and I confess I found it a bit insulting — was whether or not I could prove that I actually made this poster, and wasn’t just passing off someone else’s work as my own.

I came up with a way to prove I did the work. I had kept all the layers intact from the Photoshop file I used to create the image (much later it was turned into vector art). Using all those layers, I created an animated gif showing the steps from start to finish.

I always liked how that animated gif came out, so the point of this story is to share the process gif with you:

Posted by David at 11:50 AM | Permalink | Comments (8)
Filed under: Art | Behind The Post | Business | Entertainment | Favorites | Star Wars

I See The Millennium Falcon

This painting is “Griselda” by Maxfield Parrish:

And here’s Carrie Fisher in Princess Leia costume for comparison: UPDATE: Skywalker “HOPE” Posters and Shirts are once again available

October 27 Update:This post has been rewritten to reflect the latest news.

I’m pleased to announce that t-shirts and posters based on the Luke Skywalker “HOPE” design I posted recently are once again available! They were inspired by Shepard Fairey’s famous Obama “HOPE” poster, so be sure to check out his site www.obeygiant.com.

Posters and T-shirts are available for purchase at Zazzle.com.

Click on the Poster or Shirt below for available sizes and apparel styles:

Also available: The Imperial Party T-shirts and Posters requested by many of you:

There’s still time to get yours before election day!

In a political campaign far, far away…

Update: The Luke “Hope” Poster is now available for purchase with Lucasfilm’s blessing. Also available as a T-shirt.

A long time ago, in a political campaign far, far away, this poster was hanging in campaign offices across the galaxy…

…and these logos were on bumper stickers from Alderaan to Yavin:

I’ve never been a fan of hotel room coffee, but it’s better than nothing. However I was a bit surprised to find Darth Vader hiding in this coffee maker recently.

I’d heard the rumor that the AT-AT walkers in Empire Strikes Back were inspired by Oakland’s container cranes, and while the resemblance is there I wasn’t surprised to read that George Lucas has debunked the rumor.

However, I recently saw these container cranes in Quebec that look even more like AT-ATs than those do. Maybe I can get a new rumor started.

Previously: I see the Death Star

Posted by David at 7:04 AM | Permalink | Comments (6)
Filed under: Entertainment | Pareidolia | Star Wars

How bold can Darth Vader be?

The above word-cartoon is the end result of that quote rolling around in my head for weeks. I’m not sure how successful it ended up being, but I know there’s a font pun to be made somehow with that line.

I started out trying to literally depict that scene from Star Wars using letterforms, intending to use bold letters for Vader and light letters for Princess Leia. I loved the idea of the @ sign filling in for Leia’s hair bun. But after a few attempts I concluded that I’m no LIDA when it comes to making art from letters. I just couldn’t get the fabric to look like fabric without making the entire thing out of parentheses and tildes of various sizes. And that kind of misses the point. The letter “M” sort of did what I wanted, but not really. It’s too rigid.

Then I wondered if maybe I needed to stop trying to depict the scene from the movie, and just draw Darth Vader alone, made out of bold type. In many ways it’s the most visually striking of the attempts, but I felt like I overlapped the letterforms so much in his helmet that they were becoming mere shapes rather than letters. But here’s how that ended up:

So ultimately I decided to just use different fonts and weights to write their names (seen at the top of this post). But just floating in the frame without a sense of place, I’m not convinced that works, either. And it’s less amazing than pictures made of letters.

I see a Sandcrawler

It’s been a while since I’ve seen something from Star Wars hiding in plain site, so maybe my brain was a little too primed to find one. But sure enough, I found this Sandcrawler hiding behind an Anthropologie store this week. 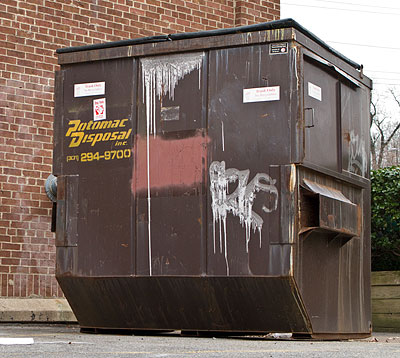 I see the Death Star

Whenever I walk through the Union Square subway station, I have to navigate through all these vertical I-Beams that are all over the place. It always reminds me of something, but I couldn’t figure out what. Finally it dawned on me. It’s the first stage of the Death Star level in the Star Wars arcade game. Watch this comparison video to see what I mean:

(Nothing is wrong with your speakers. The video is intentionally without sound)

Posted by David at 11:57 AM | Permalink | Comments (27)
Filed under: Entertainment | Pareidolia | Star Wars

I saw this garbage can the other day. It reminded me of R2-D2. Posted by David at 7:42 AM | Permalink | Comments (15)
Filed under: Entertainment | Pareidolia | Star Wars

What ever it is I think I see, becomes an imperial storm trooper to me.

At least, that’s the first thing I thought when I saw this car yesterday. Maybe I’m reaching. Or maybe it’s just a slow blog day.